Here are the reults fom the first round of the 2011 season:

The South Cardiff Panthers were victorious for the second year running in the Cymru Clwb Challenge which was hosted by the Bridgend Eagles at Heol-y-Cyw RFC. The Panthers manged a perfect record on the day with four wins from four games. The winners were decided in the last round where the unbeaten Cardiff club faced off against an unbeaten Swansea Magpies team.

Unfortunately for the Magpies the Panthers were in great shape going in to the game, coming off a bye going in to the decider. Ruckman Chris James proved unbeatable in the contest, ably assisted by no less than four of his GB Bulldogs team mates. The inexperienced Magpies managed to put in a brave effort but the fitness and skill of the Panthers proved too much for them.

The Bristol Dockers made their WARFL debut in the tournament securing third place. They, along with the rest of the teams who took part, proved they are not to be underestimated in the league this year which is certain to be highly competetive.

Congratulations to Billy Hall from the Dockers who was voted as Best on Ground. 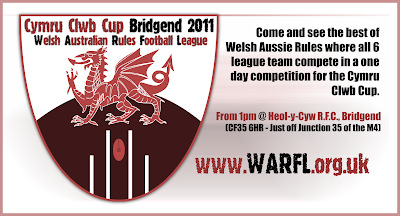 The annual start of season tournament takes place on saturday 21st May at Heol -y- Cyw Rugby Club in Bridgend. Each WARFL team will battle it out for the Cup, currently held by South Cardiff Panthers. The Bristol Dockers will make their Welsh Aussie Rules debut in the competition following their decision to join WARFL for 2011.

The competition starts at 1pm. Five league teams are involved with new WARFL team, the Bridgend Eagles, fielding a combined team with the Vale Warriors. It's certain to be a thrilling start to the new season where teams are expected to field new recruits and put into practice some of those off-season training drills and tactics. Preceeding this years tournament will be an umpiring course and it's expected that some new umpiring recruits will take charge of some of the days games.