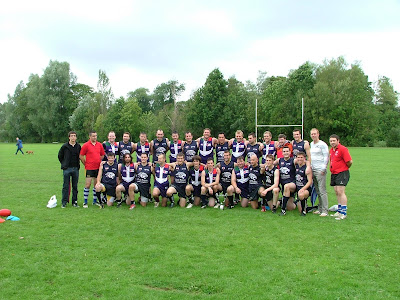 The Cardiff Panthers cemented themselves as one of the best home-grown 9-a-side Aussie Rules teams in Britain on Saturday as they held off a strong challenge from the Bristol Dockers. Without talismanic ruckman Chris James who is currently at the International Cup with the GB Bulldogs, the Panthers fought hard to win their third Welsh Australian Rules Football League Premiership in as many years. 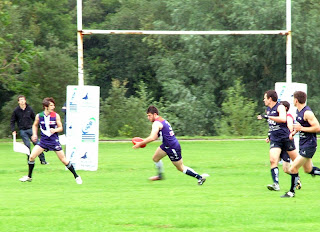 On a wet Cardiff morning, the Panthers knew they were in for a tough battle as the Dockers scored the first goal of the game within seconds of the first whistle. The Panthers though came back to score almost immediately after and goals at one end seemed to be constantly met with a goal at the other. The Dockers finished strongly however and went into quarter time leading by a goal.


It was the first time this season that the Panthers had finished a quarter behind and they were determined for it to be the last. Bristol’s experience of playing in the London Leagues however made them a tough team to break down. The Panthers though were prepared to fight them until the last and as the third quarter drew to a close, their fitness and strength in depth saw them start to pull away. In the final quarter, despite the best efforts of a Dockers team heavily loaded with Australian talent, the Panthers strolled home to a 23 point win. 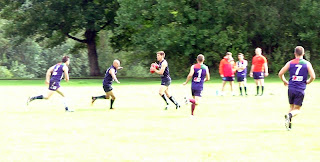 Andrew Atack led brilliantly from the goalsquare, throwing the Dockers defence into chaos whilst David Gamble was strong in the ruck and defence and was named Best on Ground. It has been a truly remarkable season for a Panthers team who have lost only twice in the last two years and who fielded an Australian National in a game on only two occasions this season.With the season now over, the WARFL turns its attention to two upcoming international tournaments and will be putting forward the Cymru Red Dragons for the inaugural Home Nations Cup in Worksop and EU Cup in Belfast.
Posted by Aled Morris at 17:05 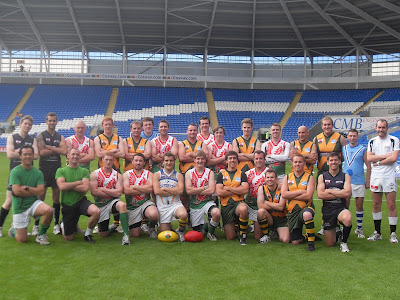 The emergence of Aussie Rules as a growing sport in the UK was further proved on Wednesday night as the Welsh Australian Rules Football League put no a exhibition of the sport at the Cardiff City Stadium.
The Football Association of Wales invited the WARFL to play on the field as before the Wales vs Australia football match last night. As the fans took to their seats, a 6-a-side "smother-game" was put on by players representing all 5 Welsh Clubs in the WARFL Premiership.
James Gibson, President of the WARFL said “This was an excellent opportunity for the Aussie rules league in Wales to show another form of "footy" tonight, many thanks to the FAW for this chance”
The League also seemed to gain some famous fans with Reading FC’s Socceroo goalkeeper Adam Federici having an impromptu kick-a-about after the expo and English Premiership players Tim Cahill (Everton) and Mark Schwarzer (Fulham) signing a Sherrin and wishing players from the Cardiff Panthers good luck in their Grand Final match with the Bristol Dockers.


The WARFL hopes to expand on this exposure with further growth next year. 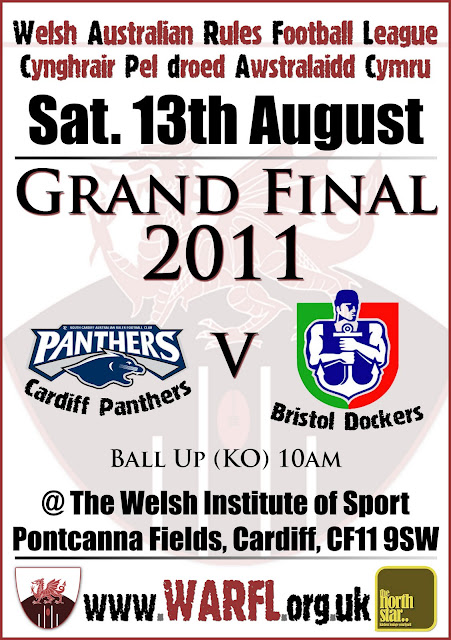 The Cardiff Panthers will be looking to win their third consecutive WARFL Premiership when they took on the Bristol Dockers on Saturday 13th at the Welsh Institute of Sport, Sophia Gardens. The game starts at 10am behind the Swalec Stadium and the Panthers will want to continue their unbeaten run which has seen them become one of the most consistent teams in Britain. Their only defeats in the last two years have come at the hands of last years Grand Finalists the Swansea Magpies and an Australian saturated West London Wildcats team.

The WARFL Grand Final takes place at the Welsh Institute of Sport, Pontcanna Fields, Sophia Gardens on Saturday  13th at 10am. For more information  and to find your local club, please visit WARFL.org.uk
Posted by Aled Morris at 21:39 No comments: